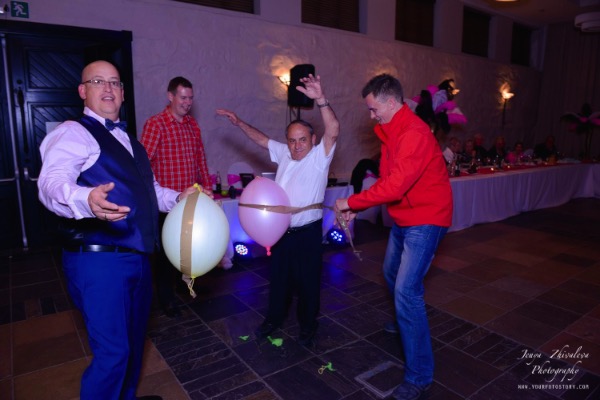 We received a late booking for a 30th birthday party at The Gannet in Mossel Bay on Thursday, 6 August 2015. The itinerary was a dirty 30’s games evening! Upon the birthday girl sending us the games list for the evening, I almost couldn't sleep from excitement! This Garden Route Dj was full of anticipation!

After setting up the rig in the venue, the birthday lady, her husband and daughter arrived looking smashing and ready for a good party! At this point we started chatting about the concept behind the games night, when it was revealed to me that this is how they celebrate birthdays in her country, which is Kazakhstan, Russia! It was also made known to me that the success of a wedding in Russia is determined by how may DAYS the wedding party goes on for… It was at this point that I realised we are in for something very different tonight, and I got even more amped for it!

She invited 20 or so of her closest friends and they arrived with welcome drinks, canapés and oysters to get the evening started! The venue was done up in a rather unique way – you will see from the pics below that mannequin legs with feathers were placed on the 4 main corners of the dinner tables – in her husbands words, these were not to be removed unless you get legless…

With a list of 17 dirty thirty games, we got cracking around 19:30 with the first batch of games to get the crowd warmed up. We had to seriously encourage some of the guests to get up and participate fortunately the lady of the moment quickly nominated those that didn’t want to volunteer hehehehe…

We started off with the old school “pass the apple from person to person under your chin” without using your hands and it certainly provided a good kick off to the evening’s game show – loads of laughter as I’m sure the players re-lived moments from their school days! Moving on to musical chairs and other familiar games started getting everyone warmed up to the idea and volunteering became the norm 🙂

We soon had dinner which seemed like great idea for the guests to get a stomach lining – there was LOADS to drink lol! The night progressed and the games got dirtier.. The nail in the bottle where the man has a nail strapped around his waist with a piece of string, hanging from his back down to his knees, the woman sits down with a bottle between her legs and the man has dip the nail in the bottle was a knock out game producing so much laughter (and cheating lol)

Two other games that stood out for me was: Flippers and binoculars – 2 teams of 2 – one set of flipper and binoculars per team. Player one of each team puts on the flippers and has to follow a route laid out, looking through the opposite end of the bino’s – when they completed the course, they other team member has to put on the flippers and repeat – first to finish wins. HAVE YOU EVER TRIED TO RUN WITH FLIPPERS LOOKING THROUGH THE OPPOSITE END OF BINOCULARS???? It was HILARIOUS!

The second being 2 men that has to fight for their lady. 2 guys came forward and the b-day girl appeared from the back with 2 pairs of boxing gloves…. needless to say everyone was expecting to literally fight it out… on the countdown, they were given a sweet in a small wrapper which they had to unwrap for their lady – the guy that could unwrap it first and give it to his lady is the winner! This was just as hilarious!

All and all, this was such a fun and amazing evening! I loved every minute of it and I have to say that this is what birthdays should be like – create something that is different, unique and that includes your guests – everyone present should have fun! Well done to everyone that participated, you guys and gals were awesome!

To Yuliya, superb job with the decor and the game idea! Thank you for having me past of this unforgettable evening!

If you have a special birthday celebration planned please CONTACT US for any entertainment requirements you may have!


Here are some video clips for your entertainment:

1. Apple. You will need 6-8 people, 1 apple. Guests standing in a circle will have to pass the apple to each other with no hands, keeping it under the chin. The person who drops it has to go back to the seat. The person who never dropped the apple wins.

2. Nail the bottle. You will need 2 couples, man and woman facing each other. Attach a nail with a string to the man’s belt at the back; woman holds a bottle between her legs. The first couple that can put nail into the bottle wins.

3. Musical chairs. You will need 5-11 people, depends on the participant's quantity there should be always 1 chair less. Participants will have to dance to whatever music is playing, but keep moving around the chairs, the moment music stops, they will have to sit on a chair. The person with no chair leaves. And so on until there is 1 winner.

4. Sweetie pie. You will need a sweetie plus man and a woman. Woman sits down on a chair and holds a sweetie in her lips. Once you covered the man’s eyes with a scarf, he will have to take the sweetie out of the girl’s lips without hands. The prank – while you tying he scarf, girl has to be swapped for a man.

5. Pegs. You will need to invite 2 couple man and women. Men will have to take all the pegs off from women’s body with closed eyes (scarf) in a minute. You can say the bigger amount of pegs than there actually are. The winner who collected all the pegs first.

6. Flippers race with binoculars. You will need 2 teams, 2 pair of flipper and 2 binoculars. The participants have to follow the certain path wearing the flippers and looking through the wrong side of binoculars. Who ever did it the better way is the winner.

7. Match sticks. You will need 2 people, 4 matchsticks. You will have to stick on the forehead 1 match stick and pretend that you attached 2. The participants will have to get rid of the matchstick using only facial mimics.No head movements allowed. The winner is the first one with no matchsticks on the forehead. You can stop the game whenever you think its enough, coz they will think there is still one more left.

8. Pregnancy. Game only for men!!! You will need few balloons, the bigger balloon the better! Attach the balloons to each man’s belly with sticky tape. You offer them to feel what it is like to be pregnant. In front of participants you empty few boxes of matches. They will have to collect as many matches as they can without popping the balloon. Who pops the balloon – leaves. The winner – with a whole balloon and with more matches.

9. Streaming river. You will need a long piece of paper, scarf to cover the eyes. Place all the “rivers” on the floor. Try and choose those women wearing a dress. Take them to another room, and you call them out one after another. Woman with eyes covered has to walk through the “Streaming River” not wetting her feet, meaning with spread legs. As a woman finishes her walk, you put a man on his back on top of the “streaming river.” Then you take the scarf off the woman. Can you see her reaction? Then you call the next one, story continues… while previous girl laughing her ass out.

10. Hand job. The game only fro women! You will need 4 girls, 4 glasses filled with sparkling water, less than half a glass, and with a condom on it, place it all on to the tray and cover with smth so girls don't know what’s under. The winner is first one to get it up!

11. Forks hook up. You will need forks per each participant plus threads. Tie the fork around the waist at the back, the longer the string the more difficult is the task. In any case fork level has to be the same for each couple. While good fun music is playing, they have to hook with each other; the fastest to do so wins.

12. The knight’s fight. You will need 2 pair of boxing gloves, and 2 sweeties in a paper. Invite men who wish to “fight” to the glory of their lady. Once boxing gloves are on, you give them each a sweetie. On the marks they have to open it as fast as possible and feed it to their lady.

13. Ping-Pong. You will need few couples. Each couple gets a ball, woman has to roll the ball through her partner’s trousers, put in on one side and take it out from the other. Then men have to do exactly the same but use the girl's dress or a blouse. So you have to choose couples that have this type of clothes. Who gets it done first wins!

14. Roll the ball up. You will need few couples, small rubber balls. Partners facing each other have to roll the ball up to the chin of the shortest partner, keeping it between each other’s tummy.

15. Guess who. You will need to invite 5-6 people and have tot glasses accordingly. You will explain to the participants that only 1 glass has vodka in the rest got water. They will have to drink it one after another and not to show the emotions at all of what they just had. And Daniel has to guess who had water. The trick is – all tot glasses filled with Vodka. The best “actor “wins.

16. Pop the enemy’s balloon. You will need balloons and few people. Attach the balloons to the participant’s ankle, same quantity for everyone. And on your mark under the fast music they will have to try and pop all the balloons of their “enemy”. The person with no balloons leaves.

17. Portrait. You will need big piece of paper and marker. Put Birthday girl on a chair so all guests can see her. One by one guests take a marker and with scarf on their eyes have to draw one body part of birthday girl at a time. Then comes another guest, when portrait will be finished everyone writes wishes on it and present it to a birthday girl.